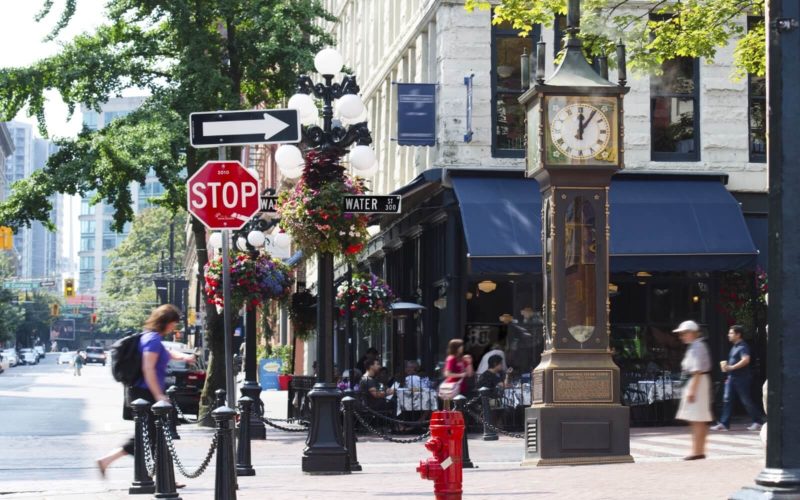 The best things to do in Gastown are a great reflection of the area’s vagrant past and trendy, sophisticated present.

This historic charm and pioneer spirit makes it Vancouver’s answer to New York City’s Lower East Side or London’s Shoreditch.

Here’s what to see in Gastown in Vancouver, living the charm and the grime like a local.

Best Things to Do in the Gastown District in Vancouver

A must on any Vancouver itinerary, the gold medal of things to do in Gastown goes to this famous landmark.

Built in 1977 to signify the completion of the Gastown Vancouver revitalization project, the clock steams away every quarter hour.

The clock is on top of a steam grate that is a part of Vancouver’s downtown steam heating system.

Take a quick trip back into Vancouver’s gritty past with this unconventional 90 minute walking tour that recounts Gastown’s rough and tumble history.

Equal parts Gothic theatre adventure and walking tour, the Lost Souls of Gastown allows you to visit the neighbourhood’s most important sites while your guide reenacts tales of the vagabonds, beggars, and thieves that once called it home.

Intended for adult audiences, this Gastown tour recounts dramatic personalized tales of boom and bust. From gold rush fever to small pox outbreaks and the Great Fire of 1886, that nearly destroyed the entire neighbourhood.

This is one of the best things to do in Vancouver, hands down.

No Vancouver neighbourhood goes to bat for the local food scene like Gastown, so it’s only fitting that one of the most fun things to do in Gastown involves eating.

The area is well known for some of the best restaurants in Vancouver, including:

💡 Wanna stay local? Check out the Best Hotels in Gastown

Located at the top of the Harbour Centre, a 5 minute walk from the Gastown Steamclock, Vancouver Lookout is an observation deck located 553 feet (168 metres) above sea level.

Here you get stunning panoramic views of the North Shore Mountains, The Pacific Ocean and Vancouver’s skyline.

Take advantage of the interactive displays or even a multi-lingual tour from a knowledgeable local guide to learn more about the city’s past, present and future.

The best part is that admission is valid all day! So you can head up in the morning and return at dusk for the breathtaking views of the sun setting over the Pacific Ocean.

The Vancouver Police Museum offers and in-depth look at the history of crime and punishment in the city.

Located in the former home of the city’s morgue and coroners court, the museum was opened in 1986 to celebrate Vancouver’s centennial and the Expo ’86 World’s Fair.

Operated by the Vancouver Police Historical Society, a non-profit organization, the museum houses over 20,000 objects, photographs, and memorabilia.

Learn about notable historical crimes, the history of forensic science, and the evolution of crime scene investigation techniques. It is undoubtedly a must see destination for fans of murder, mystery, and intrigue.

Of all the things to see in Gastown the sight I see most often might be the bottom of a glass – because the Gastown area is home to many of Vancouver’s best bars.

I love hitting up the happy hours here, and you’ll usually find me on a stool at:

I recommend embracing your inner sense of spontaneity by spending an afternoon tripping over the area’s signature cobblestone streets.

Start your journey at the historic street’s outset, located at 375 Water Street, a short walk from Waterfront Station. Then head East, stopping to check out Gastown’s marquee attraction, the Gastown Steamclock, located at Water and Cambie.

Make sure to time it right and arrive at the top of the hour! You’ll hear the clock play the Westminster Quarters.

Yes, many locals will complain about the cheesy souvenir shops in Gastown – think stuffed beavers and t-shirts that say Canada, Eh? – but that’s not all that’s there.

Gastown is home to amazing spots for unique First Nations art like the Coastal Peoples Gallery.

You can also get great British Columbia gem jade at spots like Cavalier (inside the Dominion Building).

Blood Alley is said to have received its ominous name from bloodstains left by the numerous butcher shops that formerly called this area home.

It’s also home to Tacofino: on my list of Vancouver’s top things to eat.

Blood Alley terminates at Carrall Street, ex site of the Gassy Jack Statue (which was toppled and removed in 2022) in Maple Tree Square, the social hub of the neighbourhood that now bears his name.

Maple Tree Square is home to numerous bars, restaurants and cocktail lounges that are sure to offer something for every palette.

A must for foodies, The Gastown Walking Food Tour allows travellers to wander the alleys and streets of Gastown while eating like there’s no tomorrow.

With an improv comedian as your guide, you’ll visit Vancouver and all of Gastown’s major attractions while learning about the area’s dramatic transformation from its Wild-West outpost beginnings to the sophisticated urbaness we see today.

The tastings vary by season but typically include beer-battered fish and chips, hand-made chocolates and the best cheesecake in the city!

All washed down with a sampling of local wines and craft beers!

The Vancouver Highlights Bike Tour allows you to cycle the city’s main attractions via the famous Vancouver Seawall and a variety of dedicated bike-lanes.

It starts with a trip into Stanley Park. Then you and your new friends will take a quick ride along the Seawall before jumping on an Aquabus to Granville Island to explore the market.

Once you’ve had a nice lunch (not included), it’s back onto the Seawall through Olympic Village towards Chinatown, where you’ll visit the Dr. Sun Yat-Sen Classical Garden.

It ends in Gastown, where you’ll learn the origins of the city.

Things to Do Near Gastown

Canada’s largest Chinatown is located a 10 minute walk from Gastown.

Here you can wander the historic streets, do a little shopping, or sample the authentic Chinese cuisine at Chinatown’s best restaurants.

Be sure to check out the Dr. Sun Yat-Sen Classical Garden, the largest Chinese scholar gardens outside of Asia.

This neighbourhood highlight has been deemed the best urban garden in the world by National Geographic.

Downtown is about a 15-20 minute walk, or one stop on the Canada Line from Waterfront station.

Here there’s shopping at Pacific Centre or the Robson Strip. You can also get a little culture at the Bill Reid Gallery or the Vancouver Art Gallery.

Looking for parties? The Granville Strip has no shortage of activities on offer.

Vancouver’s legendary Stanley Park is a 30 minute walk, or a short bike ride from Waterfront Station, along the world famous Sea Wall.

Get in a little exercise and check out the stunning views of Burrard Inlet, the North Shore Mountains, and downtown Vancouver’s skyline. All while visiting one of the premier urban parks in the world and the home to the Vancouver Aquarium.

How to Visit Gastown

As it is one of best free things to do in Gastown, to do the Gastown Steam Clock right we recommend showing up 10 minutes before the top of the hour.

This will allow you to grab what will eventually become a valuable piece of real estate right next to the clock when it blows its top at the top of the hour.

There are numerous walking tours available while visiting Vancouver that will provide you with additional insight on Gastown’s unique history.

Whether it is a culinary tour, a historical Gastown tour or the popular Vancouver Hop-On Hop-Off Bus, there is bound to be something catering to your interests.

3) Check out the Views at the Vancouver Lookout

Vancouver is universally regarded as one of the most beautiful cities on earth, so why not see all of it in one shot?

That’s 553 feet up at Vancouver Lookout at Harbour Centre.

Likely the most stunning viewpoint in the city, you will receive panoramic 360° views of the Vancouver skyline, the Pacific Ocean and North Shore Mountains.

While Gastown is considered a safe area, it is located next to the Downtown Eastside (DTES), which is Vancouver’s poorest neighbourhood.

Unfortunately, the DTES has a considerable amount of poverty, homelessness, and drug addiction that occasionally spill over into Gastown.

While we personally don’t find the DTES to be dangerous, visitors without local knowledge are recommended to heed the following instructions;

5) Pair Your Visit With a Trip to Chinatown

Since Canada’s largest Chinatown is located a mere 15 minute walk away, many visitors choose to visit the two historic neighbourhoods together.

However, keeping the last point about the DTES in mind, if you intend to walk between Gastown and Chinatown, we recommend using the following route;

Located on the South shore of Burrard Inlet, Gastown was the home to the first settlement in what would come to be known as the City of Vancouver.

In its infancy the area housed the Hastings Mill Sawmill and was the Western terminus of the Canadian Pacific Railway.

The neighbourhood received its name from “Gassy Jack” Deighton, a Yorkshire seaman, miner, and steamboat captain who arrived in 1867 to open the Globe Saloon: the area’s first bar.

Initially christened “Gassy Jack” due to his loquacious nature and penchant for story telling, the name stuck, and the area around the popular saloon was soon dubbed Gastown.

A statue of Gassy Jack stood until recently in Gastown’s Maple Tree Square in his honour. However, controversy surrounding colonialism and the true nature of his so called “loquaciosness” led to its recent removal.

As Vancouver began to grow in the early 20th century, the city’s centre gradually shifted West towards Granville Street, and Gastown began to fall into decline. This was further compounded by the arrival of the Great Recession.

The Revitalization of Gastown

In the 1960’s, Vancouver mayor Tom Campbell hatched a plan to develop a major freeway along the city’s waterfront.

Construction of the proposed development would have required the complete demolition of Gastown, Chinatown, and Strathcona.

Only because of this determination do downtown Vancouver’s two most historic neighbourhoods remain intact for visitors like you to enjoy today!

In the aftermath of the proposal’s defeat, the government invested in a revitalization campaign that restored Gastown Vancouver’s historic buildings and attracted a variety of new businesses to the area.

The culmination of this revitalization project was the 1977 installation of the neighbourhood’s most famous landmark: Gastown Steam Clock in 1977.

Today it’s one of the top things to do in Gastown.

Gastown Vancouver has undergone a dramatic transformation from its rugged beginnings as a pioneer outpost in the late 19th century.

It is now home to trendy cafes, fashionable art galleries and swanky eateries that rank amongst the best in the country. In addition to being one of Vancouver’s busiest nightlife districts, the area has also become the centre of the area’s booming tourist trade.

Gentrification has also led to a demographic shift among the neighbourhood’s residents, with increasing numbers of young urban professionals moving into the areas newly upscale condominiums and apartments.

If Gassy Jack were to take a stroll through Gastown today he’d likely think he’d had one too many whiskies!

Looking for Things to do in Gastown?

I’ve dusted off all the best things to do in Gastown Vancouver and maybe you’re an expert now – but maybe I missed something.

If there’s anything else you need to know about Gastown or Vancouver in general don’t be afraid to ask me in the comments below. 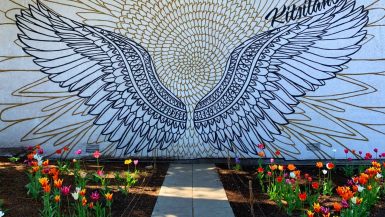 Things to Do in Kitsilano Vancouver + Neighbourhood Guide 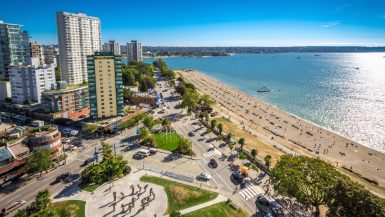 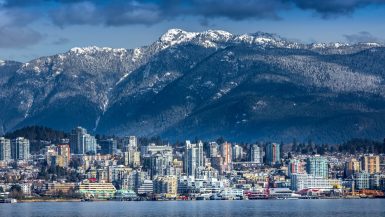