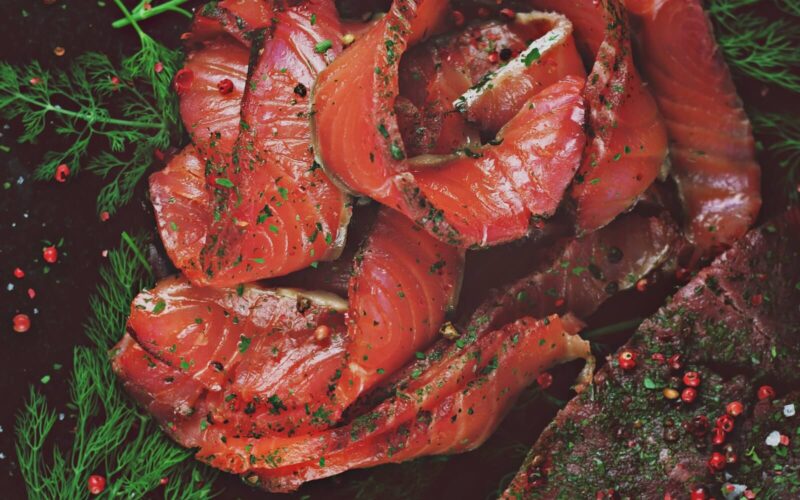 Must Eat Vancouver Food + Places to Try It

When people from another country ask me about Vancouver food I tense up and start apologizing like a true Canadian.

Their expectation of a pervasive provincial dish like pizza, paella, or pad thai is met with my disappointing answer of… beaver tails?

But Vancouver is dishing out some of the world’s best food and I’m here to show you how to try it all.

I’m going to show you what to eat in Vancouver but first a warning:

As you’ll learn in our post on things to know before visiting Vancouver, Canada is land built of many cultures so we’re not here to argue about whether old world dishes were ruined or improved upon in the ‘new world’.

I just wanna show you what’s tasty as hell.

It’s 1971 in Vancouver and there are just four Japanese restaurants in the city.

Sushi had yet to tickle the taste buds of North American diners, who mostly ate tempura and teriyaki but were sushi skeptics.

That’s when local chef Hidekazu Tojo made a sushi roll using three ‘safe’ ingredients (cucumber, avocado, and cooked crab), keeping the rice outside the seaweed as many found the look off putting.

Tojo’s invention became a ‘gateway roll’ to a sushi revolution.

The Japanese Ministry of Agriculture even named the man goodwill ambassador of Japanese cuisine – you can still try his original roll at Tojo’s.

OK, so we don’t actually chop off a beaver’s tail to make this classic Canadian pastry. The name comes from the shape and size of this flattened, head-sized donut.

These hand-stretched pastries manage to be chewy and crunchy at the same time.

The classic maple butter one is my favourite, though the more adventurous may opt for a savory version with garlic, butter, and cheese.

You can get yours as Beavertails on Grouse Mountain.

Any Vancouver itinerary in August should visit the Fraser River to see one of the world’s largest salmon runs, with the deep red sockeye variety the star of the show.

Massive chunks of the fish get smoked with a maple syrup glaze to create a sweet and savory treat worthy of royalty.

If I had to tell tourists to try just one Vancouver food, I’d put them on a bus headed straight to Granville Island Market or North Vancouver’s Lonsdale Quay and start them on this local delicacy.

Get it all at the Longliner Seafoods stall and on some of the best Vancouver food tours.

In my intro I lamented not being able to name a Canadian food – but this might be as close as it gets.

Bannock, a clay baked bread from corn or nut flour, finds the perfect cosmopolitan companion in the form of bannock tacos.

The bison bannock burger will have you forgetting about traditional buns.

So take a trip out to North Vancouver and give them a try.

Japadog is probably the best way to eat up Vancouver food and its cultural collision between Europe and Asia without dumping dollars at phony fusion restaurants.

This chain of street food stands started as just one cart in a downtown Vancouver parking lot and got as far as New York City.

The signature dog is the terimayo: teriyaki, mayo, and seaweed.

A Seafood Tower at Blue Water

A Belgian friend of mine, arguably the most cultured person I’ve ever met, once told me that Vancouver has the best seafood in the world.

I’ve lived in Italy and Spain and I still agree with him.

So let’s go big or go home and get the whole sea served up in tower form.

Blue Water Cafe is one of Vancouver’s best restaurants and their tower is full of oysters, prawns, red tuna, salmon, scallops, clams, and mussels.

When looking for what to eat in Vancouver you can’t go wrong with Chinese. To do this it’s an easy choice to get to basics in Chinatown.

It’s alchemy, I tell you! How do they get the roast pork skin so crispy and the meat so juicy? There’s also a tantalizing beef brisket curry.

If you’re out near YVR Airport you can also try HK BBQ Master.

Though this sweet, golden tree sap syrup comes from out east we’re gonna double down here with the most Canadian of ingredients.

Locals put it on pancakes, drizzle it over hot cereal or ice cream, or use it glaze oven vegetables. The tastes range from buttered popcorn (light) to caramel (dark).

For tourist friendly sizings and cute maple leaf shaped bottles go to the Gastown neighbourhood and its endless souvenir shops.

If you’re looking for industrial quantities then hit up Real Canadian Superstore.

I remember falling in love with these no bake dessert squares travelling between Vancouver and Victoria on BC Ferries in the 1990’s.

Nanaimo is actually a city just across from Vancouver on Vancouver Island, and it’s here that Canada’s most famous dessert was invented.

This three layer bar is made up of a coconut graham cracker crust, yellow custard middle, and chocolate top.

Heading over to the North Shore to see Capilano Suspension Bridge? Stop in at Bjorn Bar Bakery for the real mccoy.

Related: Best things to do in Victoria

We’ve all seen gigantic crab vessels on Deadliest Catch taking 50 foot waves over the bow in hurricane force winds – but here we can get our crabs right off the pier at some of Vancouver’s best beaches.

These 2-3 pound prized crustaceans (0.9 – 1.4 kg) are tastiest in the dead of winter. They’re meaty, nutty, and almost too sweet to be from the sea.

It’s a great way to convert the inevitable seafood scoffer in any group.

Try it at Fanny Bay Oyster Bar in Yaletown.

Humble beginnings is an understatement for Tacofino and its origin story as a BBQ in the parking lot of a surf shop in Tofino, BC.

The tempura-battered ling cod taco is one of Vancouver’s most popular dishes. This Pacific cod that grows up to 130 lbs (59 kg) lends itself perfectly to Mexican.

It’s a great meal before heading for drinks at Vancouver’s best bars.

Just look for the neon taco sign in Blood Alley.

Canada’s largest fast food chain is a must eat place, founded by an NHL hockey player – the coffee and donuts here are almost as legendary as the sport itself.

I implore you to indulge in a 10-pack ($1.99) of Timbits, donut holes that come in all sorts of delicious flavours. The maple dip donut is also a delectable option.

Canadians get the double double (coffee, two sugar, two cream) when we need a caffeine top up.

I wouldn’t call it one of Vancouver’s best breakfast restaurants, but their breakfast sandwiches are a great, cheap start to the day.

The Checkmate Caesar at Score

Let’s get ridiculous with an item that’s a drink, meal, and dessert all in one.

A caesar is a classic Canadian cocktail with vodka, clamato juice, hot sauce, and celery salt. It’s a hangover cure, a morning mix – but not at Score on Davie.

Here the drink is topped with (wait for it…) a hotdog, pulled pork slider, cheeseburger, onion rings, a pickle, a nanaimo bar, and a whole roast chicken.

It’s enough to feed two people so bring a friend.

Is it really a must eat in Vancouver?

People from Quebec will disagree but here we try to keep Canadian culinary folklore alive with this heartstopper from La Belle Province.

The mouthfeel here is off the charts with smooth, savory gravy sinking into the crunchy void of freshly fired fries with cheese pulls to rival any pizza.

I like heading to cultural hub Commercial Drive to get it at Belgian Fries.

The dream of bringing aburi (flame-seared sushi) across the Pacific to North America begins with Seigo Nakamura’s arrival in Vancouver in 2008.

His goal? An aburi concept combining Japanese and Canadian tastes where enhanced flavours and texture take sushi to a whole new level.

The result was one of the top things to eat in Vancouver, a civic obsession.

Try the sockeye salmon with jalapeño and shrimp with lime zest.

It all goes down at Miku.

What culinary trip to a coastal destination would be complete without a good old-fashioned serving of fish and chips?

For this dish we’re going to head out to the historic fishing port of Steveston Village in the suburb of Richmond.

Situated upon the iconic boardwalk of Fisherman’s Wharf is local favourite Pajos. At this small float they’ve been serving the best fish and chips in the West since 1984.

Whether you go for the halibut, the cod or even the salmon you’re guaranteed to receive only the freshest local ingredients fried to perfection. Toss in some crispy chips and traditional sides like tartar sauce, coleslaw and mushy peas, and you can’t lose.

Curious on What to Eat in Vancouver?

My Vancouver food suggestion guide is full of things to eat but it’s always possible I missed something along the way.

If something isn’t clear or you need some custom advice then get at me ASAP.

You can do this by following us and messaging on our Facebook page or by writing in the comments below. 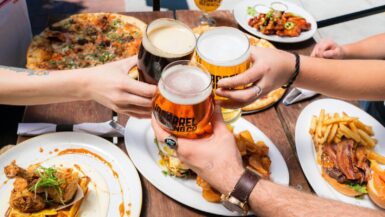 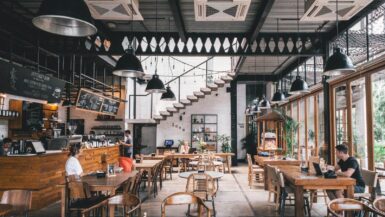 11 Best Breakfast Restaurants in Vancouver BC in 2022 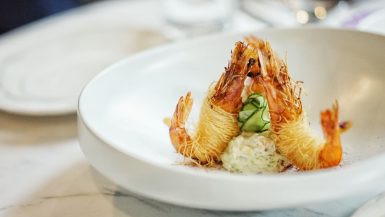 The 15 Best Restaurants in Vancouver

Have You Seen These Yet?